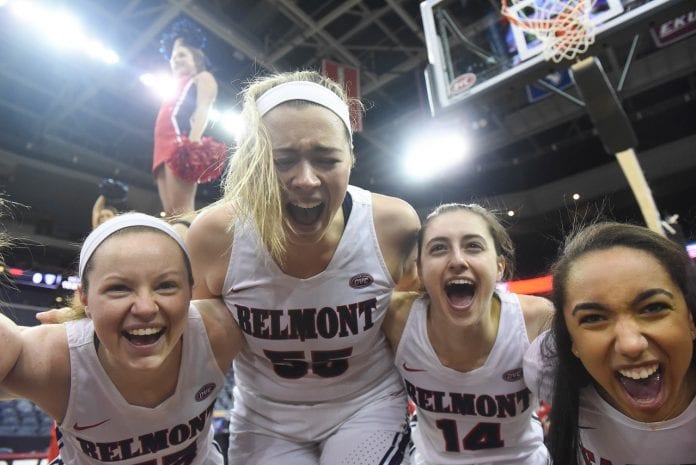 InsideHigherEd.com—an online trade publication for higher education—released today its own picks for the NCAA Women’s Basketball Tournament Bracket based solely on academic standards, and the Belmont Bruins made it all the way to the Championship game. On the road to the Championship, Belmont “defeated” some fellow academic powerhouses, including Friday’s opponent South Carolina, as well as North Carolina, Bucknell, Kentucky and Texas. Belmont’s only loss was in the title game to Stanford University.

The Belmont men’s team was named winner yesterday of their Academic Bracket on InsideHigherEd.com.

Belmont President Dr. Bob Fisher said, “On two consecutive days Belmont student-athletes have appeared at the top of a national bracket based on academic prowess. This is the ultimate victory for me in March Madness, recognizing our teams are giving their all on the court and in the classroom. Our women’s basketball team is filled with aspiring surgeons, nurses, communicators, marketers and more, and I can guarantee they are experiencing challenging and rigorous course loads. I am so proud of all they’ve accomplished and grateful to see Belmont so well represented on a national stage.”

The Inside Higher Ed website annually completes an NCAA bracket based on each team’s academic performance, with teams in the bracket “competing” based on Academic Progress Rate (APR) scores, the N.C.A.A.’s multiyear measure of a team’s classroom performance. If teams tie on APR, Inside Higher Ed then moves to Graduation Success Rate, which measures the proportion of athletes on track to graduate within six years. Belmont’s men’s basketball currently boasts a perfect 1000-point APR as well as a 100 percent graduation success rate.

Beyond their academic chops, the Bruins (26-6) demonstrate amazingly consistent talent on the court as well, winning their fourth straight OVC tournament championship March 9. The team departs Wednesday for Charlotte, North Carolina and their first round game in the Big Dance versus the South Carolina Gamecocks.

Women’s basketball Head Coach Bart Brooks said, “We’re very proud of our players, who embody what it truly means to be a student-athlete at Belmont University. Their success in the classroom is just as important as what they do on the basketball court. Through hard work and dedication to both academics and athletics, these impressive young women are already proving themselves leaders at our university and in the community.”

Associate Athletic Director Student Services and Senior Women’s Administrator Renee Schultz added, “This a tremendous honor for our Men’s and Women’s Basketball programs.  I am appreciative of our coaches and how they recruit student-athletes that value success both on the court and in the classroom.”

The Inside Higher Ed academic bracket is just the beginning of a phenomenal story in women’s college basketball. Here are a few stats to consider:

For more information on the Inside Higher Ed bracket, click here. Tip-off Friday for the Belmont Bruins versus the South Carolina Gamecocks is set for 12:45 p.m. CT from Charlotte, North Carolina, and the game will be broadcast on ESPN2.