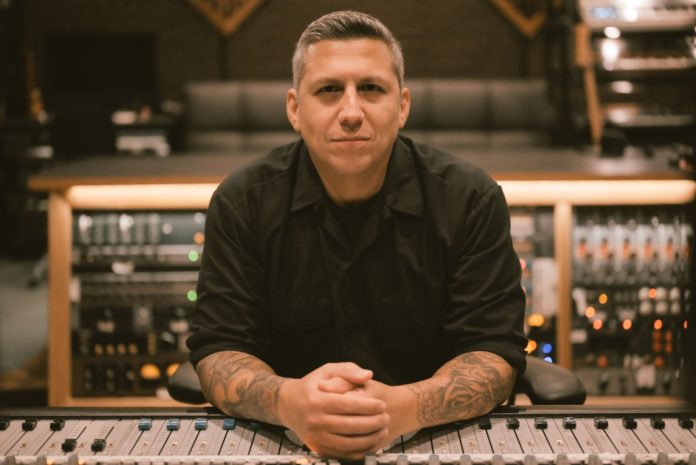 The Mike Curb College of Entertainment and Music Business hosted producer Mike Elizondo last Friday, Jan. 13 as part of their dynamic speaker lineup for the spring semester. The triple threat songwriter-producer-musician has surpassed the bounds of genre and worked with mega-artists such as 50 Cent, Keith Urban, Twenty-One Pilots, Ed Sheeran, Jay-Z, Mary J. Blige, and the Jonas Brothers, including an 11-year partnership with Dr. Dre. He received a Grammy Award for his work on Switchfoot’s album “Hello Hurricane” and is nominated for the upcoming Grammys twice for his work on Disney’s “Encanto.”

Elizondo, a Nashvillian as of 2019 and a Belmont parent, shared his first impression of the school. “I knew it from the first moment my daughter brought us for a tour of the campus. I thought ‘this is cool.’ Belmont feels like a family. It’s a college, but it’s a family.”

Hailing from the San Fernando Valley of Los Angeles, California, Elizondo was surrounded by excellent musicians in both his family and peers. His focus on the upright and electric bass led him to a band that was signed by Atlantic Records, and while the album ended up being shelved, he cites the experience as an important lesson in the hard-knock life of publishing and record deals.

However, the kickstart to his career was meeting rapper and producer Dr. Dre through a wild loop of personal connections. “He was starting his label Aftermath and was in search of new musicians,” Elizondo explained. “I went in and learned what he was looking for, and he would just call me back to play baselines.” From there, Elizondo moved beyond resident bass player and penned a song from Snoop Dogg, uncredited. The song went number one, prompting a conversation that ended with Elizondo receiving equal credit for future writing.

Enter, The Real Slim Shady. Elizondo wrote the lead single and several other songs for Eminem’s “The Marshall Mathers LP” blowing the doors open to both of their careers. Participating in those early sessions allowed him to watch artists show up and bring their A-game, eager for a Dr. Dre hit.

Hungry to expand beyond the R&B scene, Elizondo planted seeds in other genres and began working with Fiona Apple. This led him to join forces with musicians like Maroon 5 and heavy metal band Avenged Sevenfold as artists’ ears continued to perk up while word spread of the producer’s unique partnerships.

“90% of the time from my experiences, it’s a relationship that gets you in the room. The person you’re sitting right next to right now might be the one that gives you your first break.” He traced his steps, recalling the years of writing with friends who were also just trying to figure things out. Being an overnight success is rare, and more often than not, accomplishment requires unglamorous dedication to cultivating the craft.

“Learning how to interact with all types of people was definitely a breeding ground for what I still do to this day,” Elizondo said. He outlined some of the routine observations he likes to make at the start of a writing session. What mood are they in? What kind of things are going on in their lives outside of music? Interpreting nonverbal cues and understanding the importance of shifting directions is key. “Breakthrough tends to happen through a lot of trial and error,” he admitted.

Even as a seasoned musician and writer, Elizondo’s still taking on projects that allow him to lean into a new focus and provide space for learning. He recently worked on the Grammy-nominated music for Disney’s Encanto with Lin Manuel Miranda, who he previously collaborated with on three songs for “The Hamilton Mixtape” in 2016.

“Lin Manuel Miranda—he doesn’t even have to tell me what the project is, I’m gonna say yes. There was a lot of music I had to learn because it’s all based in Columbian styles, so I reached out to Colombian musicians who knew it authentically and could help bridge things together.”

Songs like “We Don’t Talk About Bruno” (nominated in the Best Song Written For Visual Media category) required instruments from the specific region, and the team’s goal was to create sounds that people from the area would hear and recognize as authentic, versus a homogenized Latin sound.

These days, Elizondo is continuing to pay it forward and invest in his long-standing passion for working with up-and-coming artists. In 2013, he played a major role in launching the band Echosmith, known for their No. 13 Billboard 100 hit “Cool Kids”, as well as assisting in the origins of several other acts over the years.

“Everybody’s trying to get the room of those big artists because they see dollar signs. But if you get the cut with the brand-new artists, then all the big artists are calling you anyway,” he said. Mike Elizondo’s phone line has been busy for decades and is unlikely to stop ringing any time soon.

When asked by a student how he decides which artists to pursue, he expressed that he invests energy in artists with an established identity. They have something unique about them—lyrics, the sound of their voice, presence—and aren’t afraid to lean into it. Elizondo encouraged students that following their gut instinct when choosing collaborators will set them up for success in the industry.

Interested in the Mike Curb College of Entertainment and Music Business?