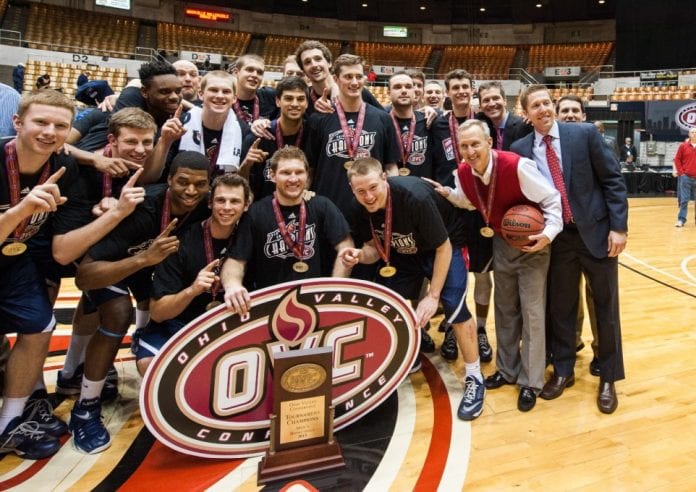 The Inside Higher Ed website annually completes an NCAA bracket based on each team’s academic performance, with teams in the bracket “competing” based on Academic Progress Rate (APR) scores, the N.C.A.A.’s multiyear measure of a team’s classroom performance. If teams tie on APR, Inside Higher Ed then moves to Graduation Success Rate, which measures the proportion of athletes on track to graduate within six years. Belmont’s men’s basketball currently boasts a perfect 1000-point APR as well as a 100 percent graduation rate. Belmont, the only team in Tennessee to be invited to the 2015 NCAA Men’s Basketball Tournament, also won the Inside Higher Ed Academic Bracket in 2013.

Belmont President Dr. Bob Fisher said, “I’ve said many times before that as much as I enjoy the spirit of competition in all of our athletic programs, nothing makes me happier than to see our student-athletes ‘win’ off the court, performing well in the classroom, serving in the community and landing careers that fulfill their personal dreams. To win the Inside Higher Ed academic bracket for the second time in three years proves our Athletics department is focusing on all the right priorities, and I couldn’t be more proud of our men’s basketball team.”

Men’s basketball Head Coach Rick Byrd added, ““On behalf of our players and coaches, I would like to thank Inside Higher Ed for recognizing the Belmont Basketball program in this way. We take pride in the academic accomplishments of our program – past and present – and full credit goes to our players. It is neat how Inside Higher Ed puts this twist on the NCAA Tournament bracket each year.

Belmont beat the Ohio Valley Conference’s top seeded teams in back-to-back games March 6 and 7 with thrilling upset wins over Eastern Kentucky (53-52) and the No. 25 nationally ranked Murray State (88-87). One game a defensive battle and the second an offensive fireworks display, both contests were decided in the final seconds with just one point marking the difference. But there’s much more to the Belmont story than thrilling finishes, and winning the Inside Higher Ed academic bracket is just the beginning of a phenomenal story in men’s college basketball. Here are a few stats to consider:

In the Classroom and the Community

Belmont learned on “Selection Sunday” that its No. 15 seed men’s basketball team will face the No. 2 Virginia Cavaliers on Friday in the second round of the 2015 NCAA Men’s Basketball Tournament as part of the East Regional bracket. Tip-off time is 2:10 p.m. Central from Time Warner Cable Arena in Charlotte, North Carolina, and a Watch Party on Belmont’s campus is currently being planned that will be free and open to the public to attend.

For more information on the Inside Higher Ed bracket, click here.