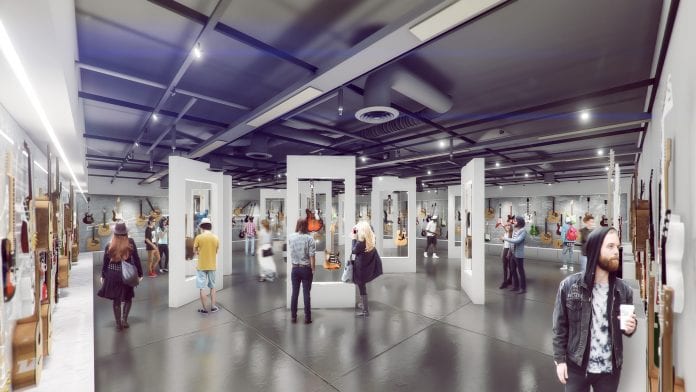 Hot on the heels of last week’s CMAs and Belmont’s announcement that it’s a major sponsor of Ken Burns’s “Country Music” documentary, the University again shows the depths of its Music City connections with news this week of plans to open a new and extensive vintage instrument-focused museum. The gift of nearly 500 historically significant instruments and supporting endowment—amounting to a total value of approximately $10.5 million—comes from the estate of the late Steven Kern Shaw. Shaw was a collector, philanthropist and the grandson of Broadway composer Jerome Kern who was one of America’s foremost composers of musical theater and popular music (responsible for such classic songs as “Ol’ Man River,” “The Way You Look Tonight” and “Smoke Gets in Your Eyes”).

Family friend George Gruhn, founder of Gruhn Guitars and vintage instrument expert, serves as co-executor of the estate and noted that Mr. Shaw’s will specified his desire that these instruments be donated to an institution capable of properly exhibiting and caring for them, preferably in the Nashville area. Beyond conveying the important history and design of these instruments, the new Belmont museum will be interactive, bringing new life and music to these unique, irreplaceable guitars and mandolins rather than merely displaying them behind glass.

Gruhn said, “These instruments are to be played and heard in concerts and recordings as well as to be available for students, musical instrument builders and scholars to study, play and learn from association with them. Belmont University was the natural choice for a permanent home for this collection. Belmont draws students and scholars from around the world and is noted for the excellence of its College of Entertainment and Music Business and the College of Visual and Performing Arts which can incorporate aspects of this collection into their curriculum.”

Belmont President Dr. Bob Fisher added, “What better place to celebrate the history and design of such vintage instruments than Belmont University, the educational home of so many talented artists and musicians. I am grateful to the Shaw estate for allowing us to display pieces in the way they deserve while also keeping their music alive through the hands of the students, faculty and artists who visit the museum or are loaned these iconic pieces of music history.”

This will be the first instrument-driven museum of its kind to open in Music City, and Gruhn noted his belief that it “has the potential to be one of the finest fretted instrument collections in the world.” The museum will seek to highlight the artistic and scientific design of the pieces while also promoting usage of the instruments. In fact, plans for the museum even include a performance space where many of the instruments will be played by both well-known and student musicians, and several of the instruments will be available for students, faculty and musicians to borrow for recordings and concerts.

Butch Spyridon, president and CEO of the Nashville Convention & Visitors Corp., said, “I can’t think of a more fitting addition to our city’s world famous brand. Belmont has long preserved, advocated and educated in the world of music, and now they can add ‘museum quality exhibit’ to their music offerings. We could not be more proud of our partner, member and neighbor.”

Gruhn and New York-based attorney Andy Boose are co-executors of the estate, and they will serve as part of a seven-member advisory board that also includes recording artist Vince Gill and Belmont administrators. The board will oversee the management of the collection. The museum is slated to open in Spring 2017 in Belmont’s Bunch Library with an original display of instruments from the Steven Kern Shaw collection. Future plans for the museum may include audio/video recordings to supplement displays, the establishment of an annual concert series and the development of archived recordings featuring the instruments.

The Shaw estate donation marks another significant addition to Belmont University’s ongoing “We Believe” fundraising campaign, which seeks to raise $300 million for the institution by 2020.