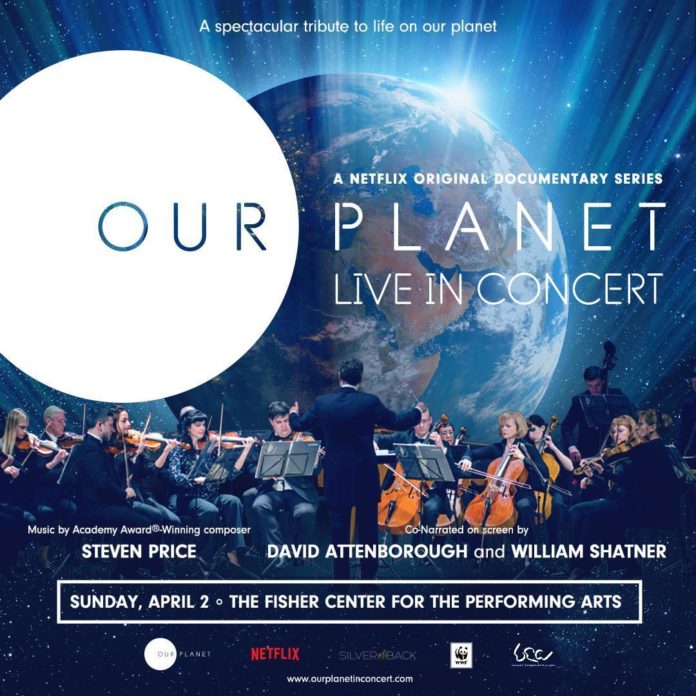 “Our Planet Live in Concert,” based on the Netflix original documentary nature series, will perform at Belmont University’s Fisher Center for the Performing Arts on April 2 at 7:30 p.m.

Audiences will experience the magic of “Our Planet” with the most memorable clips from the series projected on a large HD screen. Like the series, the live show is narrated on-screen by David Attenborough, who has brought the natural world to living rooms all over the world.

A collaboration between GEALive, Silverback Films and World Wildlife Fund (WWF), “Our Planet Live in Concert” combines high-quality live elements with a fusion of breathtaking cinematography projected on a large HD screen. “Our Planet” blends spectacular wildlife footage with the mysteries of how and why animals migrate. The series features stunning imagery of the Earth’s most beautiful, intriguing and surprising wildlife as it follows animals on the move from plains to frozen worlds to high seas and beyond. In these dramatic, compelling stories, it reveals the connections that drive our natural world, inspiring viewers to want to learn how climate change impacts all living creatures and what can be done about it.

“My deeply immersive journey into space gave me a profound appreciation for the earth and its fragility,” says Shatner. “The reimagining of the Netflix series takes the audience on a journey showcasing our world with spectacular visuals, narration and music. The combination of all these elements gives the audience an opportunity to celebrate our planet together— the home we all share —and its wonders, while showing the urgent need to treasure and protect it.”

The original Emmy-nominated score by Oscar®-winning composer Steven Price has been reworked for an epic two-hour performance, which will be performed by an 18-piece orchestra. Shatner’s narration provides bridges between the visually stunning nature imagery.