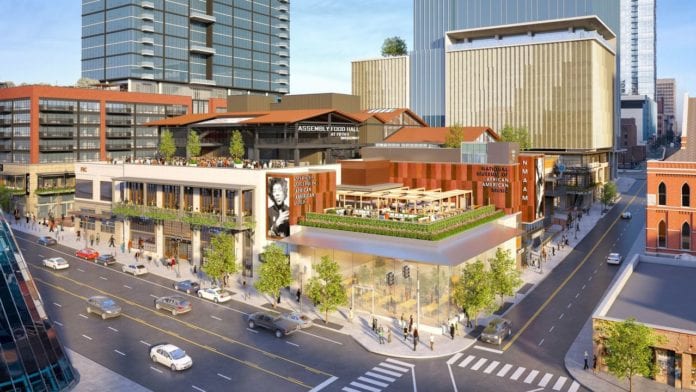 Belmont University has developed a sponsorship with the National Museum of African American Music as the museum approaches its grand opening this fall. Throughout this partnership, the University has sponsored the museum’s project, as the organization is working to celebrate the diversity of music that exists historically in Nashville.

One of the outcomes of this sponsorship has been a series of webinars hosted by Belmont University which aligns with the museum’s “Fine Tuning” professional development program for musicians. Working collaboratively to educate students and the community, Belmont faculty and museum staff discuss racial justice issues within the music industry throughout the webinar.

Henry Hicks, founder and CEO of the museum, shared, “It was a stroke of brilliance for the University to lead students in having a conversation about black voices.” The series has given a platform for African Americans’ role in the music industry and has sparked necessary conversations amongst students such as how black women’s voices have helped shape Music City.

When sharing about the partnership between the museum and the University, Hicks explained that Belmont’s financial support, as well as enthusiasm for the project, has been invaluable. He credited University President Dr. Bob Fisher, Associate Dean and Professor in the Curb College Dr. Cheryl Slay Carr and Director of Major Gifts and Industry Relations Sarah Cates with being “quick to step up and helpful to us when we’ve needed them.”

Tamar Smithers, director of programming at the museum, expressed how this sponsorship will allow the museum “the opportunity to foster a sustained and impactful partnership” with the University. “I would say it’s a conduit for students to come and potentially have formal internships where we can work collectively together,” she said.

The National Museum of African American music is working to reset Nashville’s brand as ‘music city.’ The organization wants to highlight the rich history of R&B, gospel and other forms of music that have been a part of the Nashville community for a long time. The museum is striving to positively reinforce Nashville as a diverse music city instead of a ‘country music city.’

The staff at the museum are hoping people will leave the museum feeling more like neighbors than they did on the way in. “I think that people from all walks of life will be able to come into the museum and reflect on the nation’s history,” said Hicks. “Some stories are positive and some aren’t, but at the end of the day, stories help us know and understand how we can celebrate music together.”

Smithers also shared her hope for the museum, “that it will uplift everyone’s spirits and that it will inspire people to be creatives in their own fields.”

The museum is currently on its way to completion, and as Hicks said, “it’s going to be a pretty special place.” While the uncertainty and safety precautions of COVID-19 have slowed down the museum’s opening, the goal is to open in early November.

The museum also has a membership program where the community can support the National Museum of African American Music and receive benefits prior to their opening.