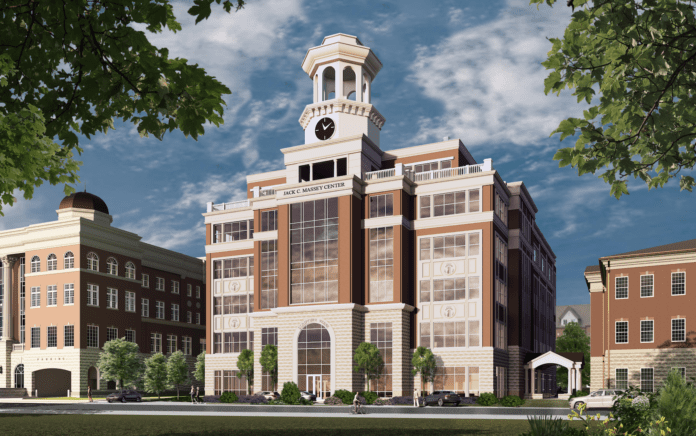 Barbara Massey Rogers and the Jack C. Massey Foundation jointly announced today a new $15 million gift to Belmont University, matching the largest single gift in University history. The donation—which secures the naming rights to a to-be-constructed building designed to foster explorations of data, discovery and design—continues a longstanding tradition of generous support of Belmont by the Massey family while honoring the legacy of one of the greatest entrepreneurs and businessmen in American history. The new facility, to be named the Jack C. Massey Center, will be located on 15th Avenue and will be home to the University’s Admissions Welcome Center, the recently launched Belmont Data Collaborative and the Cone Center for Entrepreneurship, among other entities.

Barbara Massey Rogers, daughter of Jack C. Massey, said, “I am humbled and honored that the new building on the Belmont campus will carry the name, Jack C. Massey. The building will be a part of the Massey legacy which our family will treasure for generations to come.”

Belmont President Dr. Greg Jones added, “Belmont’s late Chancellor Herbert C. Gabhart forged a friendship with Jack Massey 60 years ago that resulted in the Massey family becoming tremendous partners to Belmont, dramatically advancing the trajectory of this campus and influencing the lives of thousands of students. Jack Massey’s leadership and support was pivotal to Belmont’s growth, transformation and impact. With this new gift we will be able to extend that impact even further, inspiring every student, employee and visitor to our campus with the entrepreneurial spirit, moral character and innovative leadership Jack demonstrated with exceptional effectiveness throughout his career. I am grateful to Barbara, the Massey Foundation and the entire family for their vision and generosity in bringing this new facility to life.”

The late Jack C. Massey (1904-1990) and his family have collectively been among Belmont University’s biggest benefactors. The first person in history to take three unrelated companies to the New York Stock Exchange, Massey’s gifts helped Belmont establish its undergraduate and graduate business programs and built both the Massey Business Center, which houses the Jack C. Massey College of Business, and the Massey Performing Arts Center. In light of the new facility being built and named in his honor, the previously named Jack C. Massey Business Center, facing Wedgewood Avenue, will be renamed the Barbara Massey Rogers Center.

In addition, Massey gifts have endowed Belmont’s Chair in Entrepreneurship, leading that program to be among the best in the nation, as well as the Massey Center for Financial Information, the first financial training lab in Tennessee when it opened in 2005. Massey gifts also established the Doyle Rogers Distinguished Chair of Law. In addition to housing offices for Belmont’s entrepreneurship and social entrepreneurship programs, the new Jack C. Massey Center is also expected to include dedicated spaces for the Kennedy Center for Business Ethics, the Center for International Business and the Beasley Institute for Free Enterprise.

Massey College of Business Dean Dr. Sarah Gardial said, “The new Jack C. Massey Center will elevate—and celebrate—the tremendous influence of Jack Massey as a businessman and as a leader who thought outside the box, conducted himself with the highest character and achieved phenomenal success. Mr. Massey stepped up to support Belmont at a critical juncture in the life of this institution more than five decades ago. Now, his example will be integral to the vision of Belmont University moving forward. Our College of Business bears his name because he represents an ideal role model for our students. Through this new building, that legacy will be enhanced even further as his values and entrepreneurial mindset are proactively and intentionally shared as an example to everyone who enters those doors.”

Jack C. Massey began his entrepreneurial career as a retail druggist in 1930 after graduating with a degree in pharmacy from the University of Florida. His business expanded into a multi-city wholesale surgical supply operation which he sold to the A.S. Aloe Division of the Brunswick Corporation in 1961. At the age of 56, becoming bored with retirement, he went on to secure a place in American business history by helping take three separate companies to the New York Stock Exchange. Massey was a co-founder of the Hospital Corporation of America (now known as HCA Healthcare) and served as Chairman of the Board, Chief Executive Officer, Chairman of the Executive Committee and a member of the Board of Directors. He was also the principal who purchased Kentucky Fried Chicken Corporation from Colonel Sanders and directed its growth to one of the world’s largest commercial marketers of prepared foods before selling the company to Hueblein, Inc. Jack C. Massey was inducted into the Global Business Hall of Fame in 1987, and was a member of the inaugural class of the Tennessee Health Care Hall of Fame.

Site preparation for the new Jack C. Massey Center facility begins this week with plans for a groundbreaking in early 2022. The six-story building will serve multiple functions with the first and second floors designed to welcome campus visitors, prospective students and families while also providing space for the University’s Career & Professional Development team and GPS office. Dedicated academic space in the form of faculty offices and classrooms will be located on floors three and four. Transformative innovation spaces—including the Belmont Data Collaborative, the Cone Center for Entrepreneurship and other business/design functions—as well as state-of-the-art collaboration workspaces for students and faculty will occupy the upper two floors, welcoming people to come together with the goal of solving complex problems.

Plans for the building include incorporating technology to help share the Jack C. Massey story to inspire students, guests and future leaders across every potential field of study. The structure, which will be located between the campus’ Baskin Center and Johnson Center on 15th Avenue, is estimated to be complete by fall 2023.