On Thursday, less than four months after announcing a multi-million dollar gift of more than 250 works of art, Belmont University celebrated the dedication of the new Frederick Hart Studio Museum. Lindy Lain Hart, the artist’s wife, and Bob Chase, Frederick Hart’s publisher and president of the Frederick Hart Foundation, donated the works on display and were present for today’s event, along with other friends, family members and supporters. Deemed one of America’s greatest sculptors, Frederick Hart (1943-1999) created works that forever changed the national landscape such as Washington National Cathedral’s Creation Sculptures and Three Soldiers bronze at the Vietnam Veterans Memorial. Hart was also distinguished as the 2004 recipient of the National Medal of Arts along with other significant commissions, awards and achievements during his lifetime.

The largest permanent collection of Hart’s work available for public viewing, the museum offers art enthusiasts a unique opportunity to view Hart’s artistic process as the space includes works in various stages of development, molds, plasters, sculpting tools, artifacts and completed sculptures. The Museum also features a full size Christ Rising, bronze, which was gifted to Belmont by passionate Hart patrons Lee and Pam Kennedy of Sarasota, Florida. Located inside Belmont’s Bunch Library, the Museum will be open from 9 a.m.-5 p.m. Mondays thru Saturdays and 1-5 p.m. on Sundays. Belmont students, faculty and staff will have free access to the museum, and tickets for the general public are $5.

Belmont University President Dr. Bob Fisher said, “Frederick Hart was a pioneer in his time, and the legacy and impact of his art is immeasurable. His work invites us to awaken to the divine forces in our world while keeping us grounded in the goodness, truth and beauty found in everyday life. To have so much of his work available for viewing on this campus is an invaluable gift, one that I believe will prove inspirational for our students and the broader community for generations to come.”

Hart’s gifts and influence are recognized worldwide. In 1997, Hart presented a unique casting of The Cross of the Millennium to Pope John Paul II in a private ceremony at the Vatican in Rome. When it was unveiled Pope John Paul II called this sculpture “a profound theological statement for our day.” Author Tom Wolfe noted, “Rick is — and I do not say this lightly—America’s greatest sculptor.”

Lindy Lain Hart, wife of the artist, commented, “In the spring of 2004, Belmont University showcased my husband’s work in an exhibition entitled ‘The Creative Spirit.’ It was the largest and most ambitious exhibition of his work at that time. The exhibition’s success and the enduring relationship it forged eventually set the stage for the 2019 dedication of the Frederick Hart Studio Museum. I am grateful to the Belmont community for its commitment to my husband’s life’s work, and I am pleased to entrust the stewardship of his legacy to an institution with the vision and determination to move the discussion about art and its role in society in challenging new directions.” 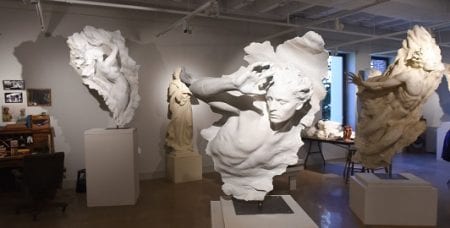 With architect ESa and R.C. Mathews Contractor, Belmont has recreated Hart’s working studio and provided display space for the collection. The first floor of the campus’s Lila D. Bunch Library—already home to the prestigious stringed-instrument collection, the Gallery of Iconic Guitars (The GIG), and the Leu Art Gallery— has been selected as a synergistic location. Together these unique artistic endeavors offer a dynamic collective to further enhance the student learning experience, attract leading scholars to explore Hart’s artistic contributions and promote further awareness of Belmont’s pursuit of excellence in the arts. In addition, the Hart Studio, the GIG and the Leu share a Nashville Trolley Tours stop with the Belmont Mansion, making this portion of the University campus a historical highlight for any Nashville visitor.

Visitors to the Hart Museum will find they are surrounded by multiple mediums from mere sketches to completed works by Hart. Included is an extensive presentation on Hart’s innovative use of clear acrylic resin, the medium Hart pioneered to cast figurative forms which he described as “sculpting with light.” This innovation led to a patent for the process to embed one clear acrylic sculpture within another. The museum will also focus on historical and biographical insights into Hart’s life, and experiences that shaped his ideals and his critical positioning of the importance of the human figure in the visual arts. The Museum is, in a very tangible sense, creating a sacred space for the viewer.

Robert Chase, Hart’s publisher and president of the Hart Foundation, added, “We are thrilled and grateful that Belmont University will be home to the Frederick Hart Studio Museum.  This museum will offer historians, students, educators and the art-loving public a more complete and intimate view of his life, work and philosophy than has ever been available previously.”